Strategies for integrating your Intranet with Microsoft Teams

Over the years, organizations have empowered their workforce with rich intranets to drive productivity and employee engagement. The intranet has been the natural starting point for daily work providing employees with organizational news, policies and instructions, access to applications and collaboration teams, possibilities to find people and knowledge, and much more.

But in recent years, we have seen that the intranet’s position as an organizational centerpiece for communication and collaboration is challenged by the fast-growing Microsoft Teams.

In many organizations, end-users have taken Microsoft Teams to their hearts causing decreasing adoption and use of the intranet. This development has caused confusion for people working in Communications, IT, and Business Development functions and triggered questions on how Microsoft Teams and the intranet can complement each other.

In this blog post, we will discuss a couple of implementation strategies when it comes to how to integrate your intranet with Microsoft Teams.

The growth of Microsoft Teams is skyrocketing

Microsoft Teams was launched in 2017 as a replacement for Skype for Business and could be seen as a response to the fact that Slack and similar vendors were growing their share of the collaboration tools market. Since then, the number of users has been skyrocketing to over 100 million users and the product has become an integral part of Microsoft 365, supporting end-users to chat, meet, call and collaborate.

In Microsoft Teams, it is easy to create a team for collaboration, invite peers to the team and start sharing content, conversations, announcements, and tools. The product also contains tools for personal productivity such as calendars, contacts, calls, chat, and access to files in a simple way.

The product also provides access to a stack of Apps that can be used within the Teams client to support daily work. Here you will find the possibility to deploy other Microsoft 365 services, like SharePoint lists, Planner boards, or Yammer communities. There is also a pool of other apps making it possible to connect services from Adobe, Jira, Trello, and many more to teams.

But even though collaboration and personal productivity might be the focus of the product, it has in many cases also been used for internal communication purposes. There is a possibility to create organization-wide teams in the product, where all employees will become members automatically, and it might be tempting to push out news and messages on such channels.

Over time, end-users have taken Microsoft Teams to their hearts and in many organizations we have even seen the emergence of Teams-first users, meaning those that use Microsoft Teams as their primary client and interface to information and interaction with colleagues – instead of using a web browser to access the same resources on the intranet.

What the intranet still does best

If we compare the capabilities of Microsoft Teams to some common objectives for intranets it is easy to see the overlap. Intranets are often thought of as being the natural starting point for daily work, supporting internal communication, collaboration, and knowledge sharing, and being connected to the most used systems and apps. But as we noted above, several of these statements also goes for Microsoft Teams.

In August 2020 we ran the webinar “How do Microsoft Teams change internal communication” to try to clarify some of the confusion within the Teams vs. intranet area. Our guest speaker was Sam Marshall, Managing Director at Clearbox Consulting, and he shared a lot of useful insights on how Microsoft Teams and an intranet can complement each other (the webinar is available on-demand using this link).

Sam pointed out that Microsoft Teams in many cases has been rolled out as a collaboration tool, but once it was available and end-users adopted the product it also became a way to communicate with the organization. But he also stated that it is not one tool or the other, rather that you should have a nuanced way of looking at what tool can be best used for what purpose.

When it comes to internal communication, Sam recommended using audience size to understand what tool will work best for what type of information, and an example was that an intranet is better for publishing corporate news, while Microsoft Teams could be better used for announcements within a project team.

He also stated that you should not try to move your communication channels from Microsoft Teams to the intranet and noted five examples of what the intranet still does best:

To that list, we would also like to add that many organizations struggle when it comes to delivering a smooth collaboration experience – especially over time. The number of collaboration teams within an organization will grow by the day, but since Microsoft Teams delivers limited support for implementing governance policies (provisioning templates, approval workflows, metadata, retention, statistics, etc.) there is a risk that the environment will become cluttered and hard to navigate for end-users.

Connect your intranet to Microsoft Teams

Our take on the overlap between the intranet and Microsoft Teams is that connecting these platforms to each other is a way to get the best out of two worlds. Microsoft Teams has the audience, a standardized simple interface, and effectiveness when it comes to connecting people to share information. While intranets bring governance, rich publishing, navigation, overview, and look and feel to the table.

We recommend that you should decide on a strategy or a roadmap when it comes to combining the intranet and Microsoft Teams and below we share four examples of what your approach to integrating the two platforms could cover:

For many years it has been widely accepted that the collaboration environment within an intranet needs to be well-governed. This, however, has not been the case when rolling out Microsoft Teams.

Organizations have developed their intranets looking for possibilities for orchestrating Microsoft 365 resources, providing templates and content, monitoring, archiving, and retention of collaboration teams. But when it comes to Microsoft Teams, these capabilities have been lacking.

So, a first strategy for integrating your intranet with Microsoft Teams is to ensure that the governance concept that you have, or want to have, within the intranet also is deployed to Microsoft Teams, for instance:

The above bullets would deliver a strong governance concept to the collaboration environment as well as a simple and structured process when creating new teams, see an example in the image below. 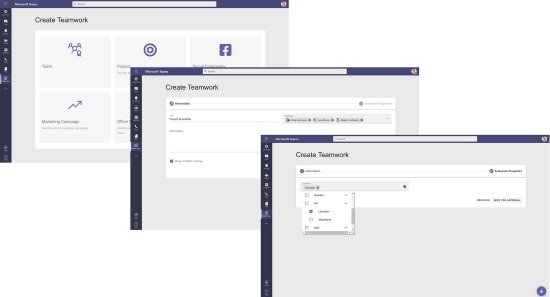 We mentioned above that it is possible to deploy apps to the Microsoft Teams experience. There are plenty of ready-made apps to choose from in the product, but you can also create and use custom apps.

Within your intranet platform or product, there might be ways to create the latter without having any developer skills. In a best-case scenario, there is even an interface where you can create a web page, deploy an intranet feature to the page, save it as a Microsoft Teams app and deploy it to the Teams environment.

This strategy might be a good idea to follow if your intranet has some popular functions that would bring value to end-users in the Microsoft Teams client. Since navigation and search often are considered being poor in Teams, you might pick features within these areas to deploy to the Teams client.

An example of this is found in the image below, where the intranet search experience has been deployed as a Microsoft Teams app. However, if you want to provide enhanced navigation, intranet forms, news, or other features that might be popular in your intranet, there could be deployed in the same way. 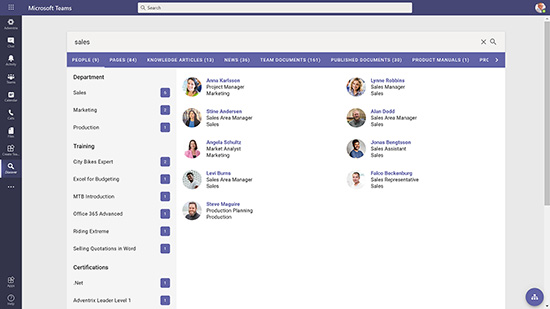 Besides deploying intranet features to Microsoft Teams, there is also a possibility to provide a full intranet experience to the Teams client. The procedure would then be the same as below, but instead of delivering separate functions, you would deploy the whole intranet as a Microsoft Teams app. This strategy would make the intranet available on a tab in the Teams navigation bar as seen in the image below. 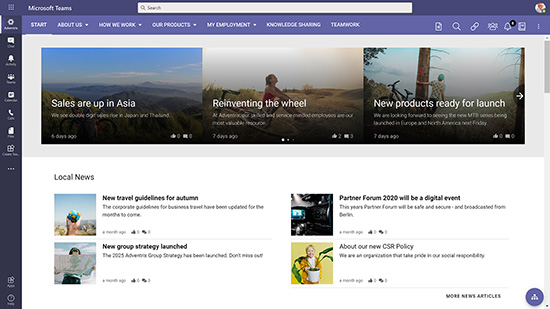 So, when opening Microsoft Teams in the morning you can check your calendar, recent activities in teams, and chat conversations, and then open the intranet to check for corporate news and other content.

Mirror Teams discussions on the intranet.

We often get questions regarding replacing a social feed on the intranet start page, with a feed that is mirroring conversations and activities in Microsoft Teams to the intranet. The questions also cover the possibility to mirror discussions in one collaboration to a certain web page on the intranet.

Is this possible to do? Yes, it is! Would it be a good idea? We are not too sure about that.

The reason for that is simply because the adoption of Microsoft Teams is high in many organizations, and in those end-users seems to prefer to take part in their chat messages, team conversations, and other activities in the Teams client.

A relevant analogy might be that many organizations wanted to deliver ‘My recent e-mail’ to intranet start pages some years ago, and those that went ahead with the idea found it was poorly used. It became clear that end-users wanted to read and respond to e-mail in Outlook, not in a customized intranet interface. We believe that this might be the case also for Teams conversations.

So even though Microsoft Teams is challenging the intranet as the centerpiece for communication and collaboration, we believe that there is a bright future for intranets. At least if you make sure to design and develop a solution that can work together with Microsoft Teams, making the two solutions complement each other and co-work to build a stronger user experience.

Microsoft Teams will continue to grow and become a first-choice interface for many users, but by choosing a strategy on how to handle the overlap – your intranet will fit right into that development. If you want to learn more about strategies for connecting your intranet with Microsoft Teams, please join our free webinar on the subject.